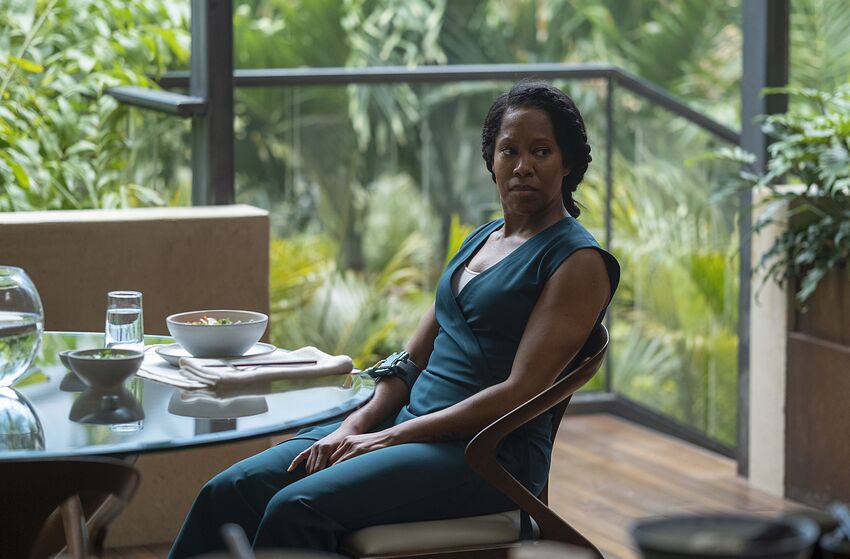 Once again, Watchmen explores another character’s past, this time Angela Abar’s, and her story leads to what is the biggest shock of the entire series.

So last week’s episode of HBO’s Watchmen was a real trip down memory lane (emphasis on trip). After overdosing on her grandfather’s Nostalgia pills, Detective Angela Abar, a.k.a. Sister Night (Regina King) relived her grandfather’s life, discovering that not only did he kill Judd Crawford like he said, but that he was, in fact, the real Hooded Justice. She also learned that, back in the 1940’s, the Klu Klux Klan were attempting to create race riot via mass hypnosis, and that Will stopped them before they could carry out their master plan.

When Angela does come to during this episode, she’s still trying to get over the effects of taking a bottle full of her grandfather’s memories. She’s mostly confined to her quarters inside Lady Trieu’s (Hong Chau) Millenium Clock, hooked up to an IV unit that also, according to Trieu, connected to Will Reeves. Oh, and since Angela is still, technically, under arrest, the front gates of the Millenium Clock are guarded by Red Scare (Andrew Howard) and Pirate Jenny (Jessica Camacho). This also means Angela’s husband, Cal (Yahya Abdul-Mateen II) isn’t allowed to see her.

But as we continue to view “An Almost Religious Awe,” the seventh episode of Damon Lindelof’s “remix” of Alan Moore and Dave Gibbons’ masterpiece, it seems Will Reeves wasn’t the only person keeping secrets. Seems his granddaughter was as well, including one which completely overturns all we’ve seen up to this point in a way that completely catches you off-guard.

Like “This Extraordinary Being,” “An Almost Religious Awe” devotes itself to several flashbacks. Not as prevalent or stylistic as from the previous episode, of course, but having an in-story function for existing nevertheless. As a side-effect of Angela’s Nostalgia-detox, she periodically relives memories from her own past while those of her grandfather’s are supposedly being purged. Considering how scenes from William’s past still appear in-between Angela’s, it not only shows how Angela still has his memories, but once again reinforces the similarities between Hooded Justice and Sister Night.

We learn, for example, that like her grandfather, the younger Angela (Faithe Herman) was also orphaned by violence; in her case, it was a Vietnamese terrorist targeting American soldiers for their “occupation” during the 51st state celebration. Also, her grandfather, movies inspired a young Angela when it came to her eventually adopting the Sister Night persona. Turns out it was the title of a blaxploitation movie she found in a video store and kept as a memento (and which her parents forbid her to watch until she was “old enough.”) Her desire to become a police officer also came from a police officer (Jennifer Vo Le), the one who apprehended the terrorist’s cohort.

History almost repeats itself again when Angela’s grandmother (Valeri Ross) arrives, though. As we learned from “This Extraordinary Being,” Will Reeves grew up with June since the time they were kids. Here, the episode makes it look as though Angela will also grow up with a now elderly June. Only after picking her up from an orphanage and just they’re about to leave for Oklahoma, June dies from a sudden heart attack. It’s enough of a shock that you wonder what’s going to happen to Angela now – until you suddenly remember she grows up Vietnam and a police officer there. In that sense, the story of this plucky young orphan girl proves effective.

Hers is not the only familial relationship explored, as we come to know a little more about Lady Trieu and her daughter Bian (Jolie Hoang-Rappaport)… or we say Lady Trieu’s mother. Yes, Bian is, as some already guessed, a clone.

As weird as the idea that Lady Trieu would raise her mother’s clone as her own daughter, it does provoke some questions about nature vs. nurture, particularly when it comes to Bian’s own Nostalgia treatments. Even though she’s being implanted with memories of Lady Trieu’s mother, she’s also clearly being educated in ways Lady Trieu’s mother likely never received. So in a sense, can she truly be considered Trieu’s mother brought back to life as she suggests? Or is Bian her own person regardless of genetics and memories?

“Thou shalt not leave!”

The episode also brings back to Adrian Veidt (Jeremy Irons) and his bizarre captivity after skipping him over last episode. As is the case with these segments, another year has passed since we last saw Adrian and his many Mr. Philips (Tom Mison) and Ms. Crookshanks (Sara Vickers). This time, it’s the conclusion of Adrian’s trial after his escape attempt, with The Game Warden (also Tom Mison) acting as judge, and a Ms. Crookshanks as the prosecutor. Naturally, Adrian chose to defend himself, but it seems as though he didn’t do a good enough job. He’s found guilty, not by a jury of his peers, but by a litter of pigs. Because Adrian is swine, get it?!

Thing is, despite Adrian’s defiance (which includes ripping a fart as his closing argument), it’s also clear from Irons’ performance that, perhaps, Adrian’s hubris has cracked. Faced with what he’s done in the past, he’s only now realizing that being intellectually superior doesn’t mean he’s also morally superior. There’s also something poetic in how those he treated as servants (and worse) have turned on him as they all repeat in unison “Guilty!” It certainly suggests that, rather than escaping whatever this place is, Adrian’s story will likely end here.

Laurie (Jean Smart) also falls victim to her own hubris and becomes trapped, too. After learning from Petey (Dustin Ingram) that Wade Tillman/Looking Glass (Tim Blake Nelson) disappeared – and seems to have killed a half-dozen Seventh Kalvary members – Laurie goes to see Jane Crawford (Frances Fisher) and makes a classic mistake. She tells Jane everything she knows: that Will Reeves killed Judd Crawford because he was a member of the KKK splinter group, Cyclops, that the Seventh Kalvary are Cyclops in a new guise, and that Judd and Senator Keene (James Wolk) manipulated everything to set up Keene’s presidential bid.

To Laurie’s shock, Jane openly admits all this, but corrects her that Keene had decided to become something other than the next president – then presses a button on her TV remote (several times) to make Laurie fall through a trapdoor. She wakes up at the Seventh Kalvary’s hideout, in front of their trans-dimensional doorway, where Keene claims – like all racists do – that Cyclops is all about restoring the “natural order.” Only in this case, that “natural order” involves bringing back a certain blue-skinned omnipotent superbeing. If you think that’s weird, don’t worry – it gets even weirder.

“Didn’t really see that one coming.”

As the countdown to the Millenium Clock starting grows near, Angela eventually breaks into Will Reeves’ room, only to find… that she’s been hooked up to an elephant instead. Because elephants never forget, get it? Once she disconnects herself (and has another flashback), Angela finds another discovery. Those phone booths which supposedly call Dr. Manhattan on Mars? Another service of Trieu Industries. And of course, the calls don’t go to Mars because Dr. Manhattan isn’t there.

“Well, of course not,” say those who’ve read the graphic novel. “Dr. Manhattan left the galaxy.” Well, that’s where you’re wrong, because according to Lady Trieu, Dr. Manhattan came back to Earth. He’s also, apparently, in danger because the Seventh Kalvary plan to kidnap him via their Trans-dimensional gateway and, somehow, Senator Keene will absorb his powers. He also happens to be living in Tulsa Oklahoma as a human. Oh, and do you know who else knows where Dr. Manhattan really is? Angela Abar.

Remember that joke from the second episode about how Dr. Manhattan can make himself look like anyone? Turns out it wasn’t a joke. Remember that talk Angela and Cal had about his “accident” from episode 4? It wasn’t really an accident; it was Dr. Manhattan purposefully giving himself amnesia when he turning himself into Cal. And before he did this, he and Angela came up with a way to restore those memories should there be trouble.

Thus when Angela escapes from the Millennium Clock and goes home, she gently tells a confused Cal how much she loves him, and how sorry she is… right before she beats him to death with a hammer. And after digging Dr. Manhattan’s symbol out of Cal’s skull, a blue glow appears in Angela’s eyes as her husband returns to his original blue-skinned self.

Next: 15 greatest superhero movies of the decade

Yeah, while everybody (except Senator Keene) could see the reveal of Will Reeves as the Hooded Justice well in advance, it’s fair to say that nobody could have foreseen this. But it certainly is in keeping with how Damon Lindelof unfolds mysteries, and does so in ways which make us question everything we thought we knew about certain characters. And it also encourages its now dumbfounded audience to keep watching to find out how any of this makes any sense. It certainly was worth another series of flashbacks, though.